On 3 September 2012, I finally got down to doing what I had wanted to do for the last three months. Climb a mountain and not just Bukit Timah.

About 1.5 month ago, Theo and I went to do a scouting trip to find the exact location of Gunung Pulai. This especially after the disappointing episode in Batu Pahat where we failed to find the mountain.

Anyway there are basically two ways to approach G. Pulai. Southwards, which is the longer and more tedious route so I don’t recommend taking this if you can help it.

From Pontian highway, exit toward Kampung Ulu Choh, passing into the small town of Pekan Nenas. Then navigate through to the town centre until you hit Jalan Sawah. Follow the dusty plantation road passing through kampung for about 10km until you see the sign, signalling you to turn right into Kampung Sri Gunung Pulai.

The northerly route requires paying a toll of RM1.80 as it uses the North-South Highway. Exit at 252 and right after the toll booth, watch out for the sign post for Kampung Sri Gunung Pulai. Take a sharp right turn to the same dusty plantation route for about 10km and then turn left into the kampung when you see the entrance which is marked by a wooden gateway.

Evidently the village has benefitted from its proximity to the mountain as the houses look slightly better maintained compared to other kampungs and they have sparkly new sign posts so visitors know who stays in which house. At the end of the village, you can park your car at any of the open spaces marked with a “Parking RM1.00” sign.

The base of G. Pulai is flanked by a stream where there is a small pool the size of a jacuzzi tub. If you fancy taking a dip, this is probably where you can enjoy what nature has to offer. A troop of monkeys call the place home and if you come in the late afternoon where it is cooler, you can see them taking their pick of the litter left behind by visitors.

We saw a monkey drinking out of a Sprite can and another trying to figure out the latest news. He scratched his head in confusion and then decided that the paper was better off used to clean its posterior. 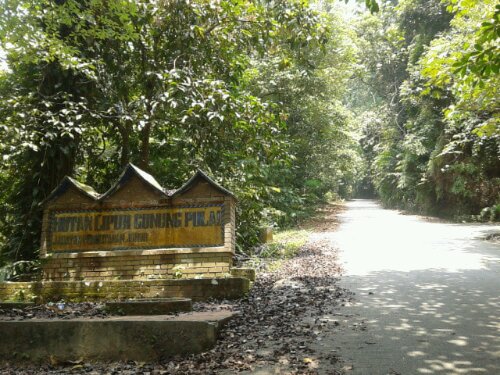 And so we started our hike up the mountain at 1.30pm under the scorching hot sun. One thing you need to know before taking on this mountain. Don’t expect a mountain trail with lots of cool overhead cover. The route is a well paved tar road used to service the communication towers at the summit and the occasion jeep or motorcycle will pass you by with ease, to tease your tired aching muscles.

The entire trek is about 5km of which the first 2km can be easily scaled in 30 minutes. The slope is pretty gentle and helps to warm up the muscles. The road follows the river below and you can hear the thunderous roar of a nearby waterfall. I read that there is a route to the waterfall but I didn’t manage to find it on the way up. I suspect it could be the dirt path from the base instead.

After the second kilometre, the road starts to ascend a lot more steeply at close to 40 degrees angle and it pretty much goes on and on until you reach the top. There is only one rest point just after the third kilometre – a wooden bench conveniently located under the shade of a tree.

I suspect many of the locals who come here for their daily/weekly exercise don’t continue beyond this point. It took us 20 more mins to reach here.

By the fourth kilometre, I was pretty much exhausted and wondering why I chose to torture myself this way. I was taking 10 steps at a time, resting for 10 seconds to catch my breath and then the next 10 steps.

All through the journey up, other than monkeys, we didn’t see any other wild life. There are a lot of butterflies here though and one particular species caught my eye.

It has milky white wings and from below, it looks like it has holes in its wings. What was distinct is the way it just glides and lets the wind take it, not the usual fluttering that I expect.

Finally after crossing the 4.5km road marker, you can make out the lower of the two communication tower. Just before you hit this, there is an opening by the side which is probably the best look out point you can get as the summit is not accessible to public. 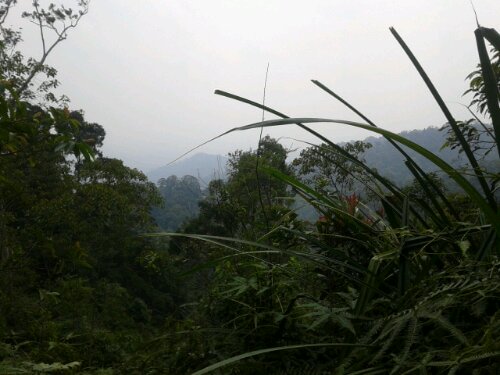 The summit ends at the gate of the military? instalment some 654 metres above sea level. Yay! I saw a few Malaysia flags planted here by conquerors of the mountain. Next time I must remind myself to bring a Singapore flag too. In total we took 1.5 hours to reach the top. 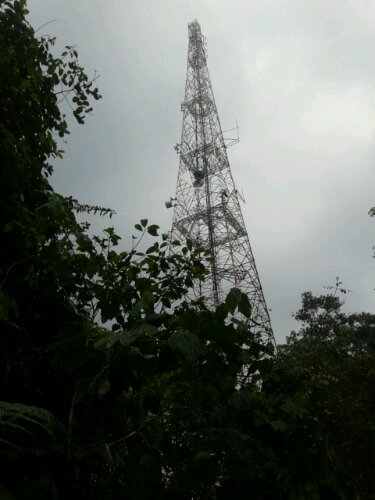 On the way down, around the 4th km mark, we found a little spring where we stopped to refresh ourselves with the cool mountain water. I even attempted to drink a mouthful and was thankful that it didn’t taste weird.

The way down is way easier as we were descending all the way with no more uphill climb. This was a welcome relief for my spasming thighs, calves and ankles. At this time we began to see many more trippers making their way up, most in their mid-40s. I felt ashamed to be complaining so much when these older folks take it so steadily in their stride.

Another curious observation is that whenever we pass a fellow trekker, he/she would tip their heads towards us or raise their palms up as a greeting. I wonder if this is some form of recognition or a way to tell others “I come in peace.” Nonetheless when we finally reached the base, another 1.5 hours later, I had already left the ordeal behind me, taking home only the pride of conquering Gunung Pulai.

Many visitors, local and Singaporeans, actually come around 5pm for their evening exercise so the park isn’t as dilapidated as I had feared.