p>Next on the alphabetical list, we introduce a town called Ba (pronounce uhm-BAH as sometimes spelled as Mba).

Ba is an agricultural service town on NW Viti Levu, the largest and most important of the 333 over islands of Fiji. It is populated mostly by Indo-Fijians which makes it a cultural point for tourists.

The region that surrounds Ba is called Sun Coast which covers 3 major provinces (including the Ba Province, the largest and most populous in Fiji), 30 districts and 160 villages.

The region is named for its relatively hot and dry climate which is suited for growing sugar cane.

The town itself sits at the western side of the Ba River delta where sugar production from surrounding sugarcane fields forms a chief export of the island’s economy. 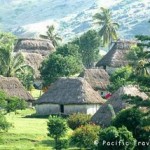 Navala village is Fiji’s most picturesque inland village, nestled on the sloping site on the banks of the Ba River. All of the houses are traditional bure – see picture.

Bukuya, located further south, can be best reached by a 4WD. It has many interesting ancient legends and taboos which provide much insight into the traditions of the hill people, past and present.